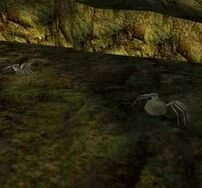 The small yellow spiders also known as Sewer Spiders have abdomens about the size of a human head, white legs, and have a painful, but somewhat weak bite. To compensate for their individual weakness, they often travel in groups, usually two or three at a time, but are very easily killed, having only a single hit point. Thus, they can be dispatched with any weapon, ranged or melee, even when alerted. When attacking Garrett, like the large green spiders they are capable of jumping to great heights, and in open combat will often jump over Garrett's head to attack him from behind. The spider can be eliminated in the following ways:

The fate of those who succumb to their venom is seen in Song Of The Caverns, where Giry, one of Garrett's associates, was discovered bound in thick layers of silk, with a grim expression and hollow looking eyes. It is not clear whether he was conscious at the time of his death, but he appears to have suffered some convulsions, judging by the posture of his remains.

Enemies, Creatures and Characters
Retrieved from "https://thief.fandom.com/wiki/Yellow_Spider?oldid=48406"
Community content is available under CC-BY-SA unless otherwise noted.