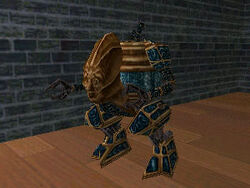 These small bots were available in huge numbers for the Mechanists. They were used to repair, maintain and construct Mechanist facilities and to carry cargo.[1]

The worker, like its bigger brothers, have rudimentary 'speech' abilities, but have been seen 'talking' to each other in The First City Bank and Trust. Being that the conversation is continually looped, might suggest it was made as such to impress the nobles that bank there.

Worker bots are completely unarmed, but like a servant, they will run to the nearest guard when they suspect trouble. These robots are, in their normal state, completely blind, but they will activate their eye once they hear a strange sound.

One Water Arrow to the boiler will easily take it out. A Gas Arrow on the boiler will work, and heavy explosives will destroy it, but this is generally considered to be a waste. 9 hits with the blackjack will also take this out of commission. Like all the other robots, the bodies can be broken down to 'corpses'. Flash Bombs will also blind the robot when it extends its eye.

Enemies, Creatures and Characters
Retrieved from "https://thief.fandom.com/wiki/Worker_Bot?oldid=64209"
Community content is available under CC-BY-SA unless otherwise noted.