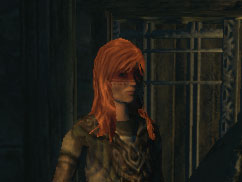 Shaman Woodbine was a high ranking Pagan Shaman in TDS, leading the group entrusted with keeping the Jacknall's Paw. She told Fangwort to get the sanctuary map from Leafer, but never received it.[1]

She keeps the secret of the "Ritual Of The Root" written in a book on her bed. The three gifts of water, moss, and blood are needed to remove the Jacknall's Paw from the clutches of the Heartoak, a massive tree.[2]

She also told Reed to keep his Bronze Beetle with him always because of Dyan's vision of the precious trinket being stolen.[3]

Woodbine had found a ruby Hammerite statuette in an old ruined factory in the area and Dyan had gave her instructions not to touch it due to Hammerite curses.[4]

Enemies, Creatures and Characters
Retrieved from "https://thief.fandom.com/wiki/Woodbine,_Shaman?oldid=67815"
Community content is available under CC-BY-SA unless otherwise noted.