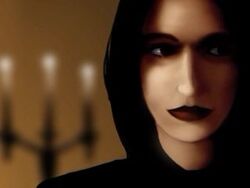 Viktoria is a wood nymph who can change her outer appearance at will. Her true visage is of a humanoid shape with attractive facial features and green, bark-like skin. Her fingers can be extended into claws or vines and her blood is in the form of a viscous yellow-green sap. Although normally a fluent conversationalist, she may break off into the Pagan dialect in moments of rage.

In Thief: The Dark Project she is allied with the Trickster against Garrett and the rest of The City. Viktoria pretended to be human for a great deal of time in order to trick Garrett into retrieving the Eye for Constantine, who was actually the Trickster in disguise. They required a human eye in order to use the artifact, so she tore out one of Garrett's eyes and left him for dead.

After the death of the Trickster at the end of Thief: The Dark Project, the Metal Age began, producing a great threat to the entire Pagan faction. She allies herself with Garrett and they unweave Karras' deadly plot to destroy all living things in and around the City. Garrett and Viktoria form an alliance as they work together against Karras. At the end of Thief II: The Metal Age, Viktoria sacrifices herself in order to stop Karras.

Some information that Ramirez holds, claims that Viktoria is an independent fence who used to work as Raputo's fence. She dominates the fields that include exotic goods and medicinal. While she has no known organization tie, she is in contact with second-tier nobility, the Grand Library and the Order of the Vine.[1] It becomes known that in fact, she works for the Trickster and is working as a fence in order to find out the information they need on the eye and who can get it for them. While her links to second-tier nobility are shown through possible deals with Lord Bafford,[2] we know nothing of the Grand Library or the Order of the Vine. However, some have taken the Order of the Vine to be a name for Pagans, despite no solid ties between the two concepts.

1/3
Community content is available under CC-BY-SA unless otherwise noted.
Advertisement