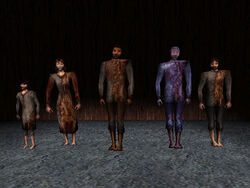 Unarmed Pagans are Pagans who have been captured or are otherwise unarmed.

The Thief II: The Metal Age, Pagans are different from the ones in Thief: Deadly Shadows, as the former are both unarmed and have no magical abilities. In general the pagans act as a regular Servant would, but usually they have some special behavior properties, or are related to mission objectives in some way. The actual living pagans (not pagan phantoms) are rare in T2 as most of them are captured by the City Watch. The only living Pagans seen outside of Shoalsgate Station are the courier working with Lt. Mosley[1][2], the possible 'assassin' of Sheriff Truart,[3] and Lotus[4].

With this in mind, they usually do not pose any threat, though the Assassin will attack.

Enemies, Creatures and Characters
Retrieved from "https://thief.fandom.com/wiki/Unarmed_Pagan?oldid=68141"
Community content is available under CC-BY-SA unless otherwise noted.