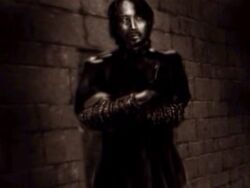 Sheriff Gorman Truart was a corrupt lawman who became the head of the City Watch. Truart oppressed the people, collected bribes, implemented outrageous taxes, brutally suppressed the criminal element, and seemed to have a particular personal grudge against Garrett. Truart regarded the law not as an end in itself, but rather as a means for those with power to control those who are without.

Despite his corruption and questionable morality, he did dramatically modernize the Watch, improving its efficiency and introducing a new, blue uniform. While not all of the Watchmen were fully up to date with the new system, evidenced by some city officers occasionally heard forgetting the numerical code they need to report a crime in progress, Truart's modernization efforts and his close links with the Mechanists resulted in the Watch headquarters at Shoalsgate Station wielding huge amounts of new technology. He also greatly increased the number of watch officers while decreasing the number of criminals by hiring them directly into the watch[1] something which wasn't liked by all the watch[2]

He lived on the Truart family estate. While his father had been seen as a loyal supporter of the Hammerites [3], Truart appeared to have no religion himself [4] and despite the Mechanist upgrades to his estate, had not upgraded the chapel from being a Hammerite chapel.

His two lieutenants were Mosley and Hagen. Truart began to distrust Mosley, due to what bordered on insubordination on his orders against the Pagans [5], he still felt she was a much better officer than Hagen.

Truart was killed in his bedroom, seemingly by a pagan agent,[6] when Garrett went to blackmail him to find out who ordered Truart to kill him [7]

Garrett can take Truart's body to the secret burial site where his family is buried, to 'bury the hatchet' between the two.

It was later revealed that Truart was hired by the Mechanists to go after Garrett.[8]

The good sheriff used this as an alias when visiting less-than-reputable areas of The City, the upscale whorekeep Madame Volari, in particular.[9]

Retrieved from "https://thief.fandom.com/wiki/Truart,_Sheriff_Gorman?oldid=73987"
Community content is available under CC-BY-SA unless otherwise noted.