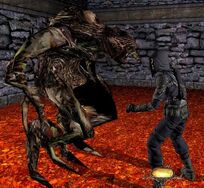 Tree Beasts are merciless fighters. They stand in a dormant state until prey walks by. The beast slowly moves its arms down and strikes with deadly speed. The bark-like skin proves to be a very effective camouflage.

The arm strike of the beast is enough to kill Garrett in one hit on Expert, and leave one 1 point of health on Hard. The beast is completely immune broadhead and gas arrows, but they take double damage with fire arrows. They are deadly fast, being able to outrun Garrett. Like every creature in the game, they are vulnerable to flash bombs.

The Tree Beast can easily be missed for it's Thief 2 appearance as it is only in the final grove part of Victoria's Maw of Chaos.

Looking like the Trees around them, they blend almost perfectly in their dormant state, giving off faint noises which alert enemies to their presence. If you awake one, the best option is to run.

The Tree Beasts in TDS are found primarily in Pagan related zones and missions, such as those in Into the Pagan Sanctuary which patrol the waterways of the sewers and Pagan sanctuary itself. They seem somewhat able to communicate with trill calls and roars, and will quickly run to the aid of injured allies to shred those that harmed them. The most effective way to take them out is with the use of Fire Arrows (one if stealthed, 2-3 if not) or using proximity mines, conventional weapons can harm them but it takes considerably longer to kill them, and they are deceptively quick with a long attack reach. Unlike the original Tree Beasts, these ones appear less tree like and do not appear in any locations where the can blend in with the woods, nor do they have a dormant stage

Also found in T2 is what appears to be a "Tree Beast mask". These and other peculiar specimens are on display at the Gervaisius Estate in "Masks".

Enemies, Creatures and Characters
Retrieved from "https://thief.fandom.com/wiki/Tree_Beast?oldid=68908"
Community content is available under CC-BY-SA unless otherwise noted.