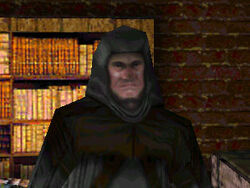 Thom was a member of the Downwind Thieves' Guild and Reuben's number one man. Because of his unmatched loyalty, Thom was the one who selected and witnessed for every member of Reuben's personal staff. As Reuben's second in command, Thom was the only one to have a key to his mansion.[1] Thom's position however meant that he was responsible in the event that any of Donal's men enter Reuben's Mansion in an attempt to acquire Lord Randall's Sapphire Vase.

Downwinders under Reuben were expected to pay him tribute via Thom.[2]

Enemies, Creatures and Characters
Retrieved from "https://thief.fandom.com/wiki/Thom?oldid=50185"
Community content is available under CC-BY-SA unless otherwise noted.