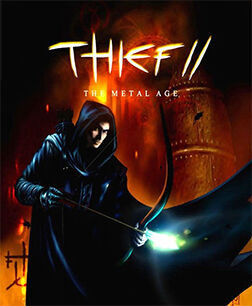 This game's plot focuses on: The Metal Age

Thief II: The Metal Age, also known as TMA, Thief 2 or T2, is the sequel to Thief: The Dark Project and the second game in the Thief series, which was developed by Looking Glass Studios. Utilizing the same Dark Engine that powered the original Thief, Thief II has an almost identical look and feel, with only minor graphical and programming improvements.

The basic gameplay is also fundamentally similar to the original Thief, with a few new elements, including technological gadgets such as a remote eye camera known as the Scouting Orb and more intelligent level designs. Other changes include an increase in the number of AI behaviors, and the addition of female guards and soldiers. A new arrow type, the Vine Arrow, which can stick onto metal grates in addition to wooden surfaces, was added to replace rope arrows in a few missions. New potions were also added.

Responding to criticism of the original Thief, the missions in Thief II were designed much more around typical thief-like behavior, and much of the game is spent robbing the rich denizens of the City rather than raiding tombs and running from monsters, which was a common element in the first game. In fact, the player encounters few of the monsters from the original Thief, except for burrick heads mounted as trophies in some of the mansions, a few zombies, apebeasts and Hammer Haunts.

The designers stated that unlike the original game, whose levels were developed to suit the plot, in Thief II the levels were designed first and the plot retrofitted to work with them. In general, the levels are much larger and less linear than those of its predecessor.

Thief II's story takes place on the streets and rooftops of a darkened city, where magic and technology mingle and the forces of a corrupt sheriff lurk just beyond every shadow, it takes someone with a soft touch and even softer step to stay ahead of the law, and steal enough to survive. For an honest thief like Garrett, the choices are clear - profit, or perish.

Players occupy the weathered boots of Garrett, a master thief expert in stealth, and unlikely victor over the mad nature god, the Trickster. It's been over a year since the events portrayed in Thief: The Dark Project, and Garrett's life has returned to a kind of chaotic normalcy, marked by daring independent thieving runs and lucrative "jobs". But the cost of business has just gone up, and Garrett may end up paying with his life.

Gorman Truart, a newly elected sheriff and bane of the city's underworld, is more than just an elected official sworn to uphold public office, Truart is a man with dark, unknown intentions. The poor and desolate are snatched from the streets, never seen nor heard from again. "Semi-legitimate" operations run by well-known wardens are raided and shut down. The increase of guard patrols has lulled the residents into a false sense of security, while corruption, graft, and treachery run rampant through the sheriff's organization. These events could probably be overlooked if not for one very disturbing fact: Sheriff Gorman Truart wants Garrett dead, and will stop at nothing until he succeeds. Garrett therefore seeks to remain alive, and discover the reason for the Sheriff's vendetta.

Set against the intrigue and mystery of the well-established City, where several factions struggle to satisfy their own (and often opposing) agendas.

Currently available for purchase on GoG.

May be able to also find it on eBay