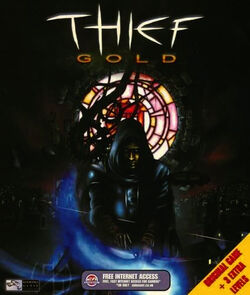 Thief Gold, also known as TG, is the definitive version of Thief: The Dark Project, as it was meant to be since the beginning. This extended edition includes all of the missions from the first release, as well as three new missions adapted to the original storyline, with full voice acting and new graphics. It can still be considered the first game in the Thief series.

This updated version adds over four hours worth of gameplay and makes a nice addition to the final product as the story develops. The first new mission, Thieves' Guild, expands Garrett's storyline as a freelance thief and demonstrates Garrett's master thieving skills as superior to an entire organization of thieves.

The other two additional levels, The Mage Towers and Song of the Caverns extend the quests for the elemental Talismans, from the two Talismans each in two missions of the original Dark Project, to one Talisman each across four missions.

An additional enemy known as the Fire Shadow has been added in the game. Fire Shadows classify as undead, and appear to be a bearded man engulfed in flames. Fire Shadows are very rare in-game. There are two in total; one is present in Down in the Bonehoard, guarding the area to the Mystic's Soul, and the other is located in a small basement in The Haunted Cathedral. Fire Shadows drop a Fire Arrow when killed, but they respawn shortly after being killed. If anything, they are scared off for some time before returning to their normal positions.

Some other changes from the original include a re-textured version of Down in the Bonehoard, a major gameplay and storyline change in the Lost City mission, a tweaked Undercover, and a huge add-on area in The Sword, which by itself is roughly the same size as the original mission.

Some minor miscellaneous sound changes include the chewing sound for bread and cheese. Finally, there is the Blooper Reel, which serves as a interactive documentary for different beta bugs of the game and displays the humor of the development team, all set in Lord Bafford's Manor.