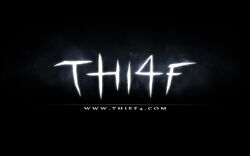 The Thief (reboot) is located on a separate wiki: Thief Wiki

Thief (originally labeled THI4F) is a reboot of Eidos' award winning Thief series. It is developed by Eidos-Montreal Studio, and published by Eidos. The game was officially confirmed on May 11, 2009.[1] Thief is not a prequel or sequel to the original games, it is a reboot of the franchise with only a few elements of the original, and is slated for release on February 25, 2014 in North America, February 27, 2014 in Australia, and February 28, 2014 in Europe. It will be released for the PC, PS3, PS4, Xbox 360, and Xbox One.

A posting on Eidos Montreal's website suggests that Thief IV may be about to undergo development. The post states that, "Eidos-Montréal is proud to announce the recruitment for our 2nd "AAA" project. … A hint! The title begins with the letter " T "… The article then goes on to draw several other conclusions. Nothing is known yet on what a possible new plot might be, apart from claims that it was initially intended to be a "retelling" of the original games. May 11th, 2009 would be the reveal of Eidos Montreal's latest project that starts with a "T".

Eidos-Montreal has recruited the "very best core team" for Thief 4, which is in the early stages of development.[2] No further details about which game platforms will come for or expected date was revealed. The Thief series fans can connect to the like-minded fans and discuss more about the upcoming title at the Thief 4 Forum.[3]

Thief 4 is currently being developed by a team of about 50 talented designers, at Eidos-Montréal studio. The producer of "TH4" (as it is known on the Eidos website) is Mario Aguera, who oversaw the successful release of numerous titles on the Xbox, Play Station and Nintendo Gamecube consoles. Mario has been creating games since the late 1970’s.

In 2010, Eidos-Montréal appointed Paul Weir as the Thief 4 Audio Director.

Some controversy had arisen over the name of Thief 4.[4][5][6][7] It is reported that THI4F will not be the final name this game, and is only a working title.[8]

Eidos Montreal (was) taking the voice work of Thief 4 very seriously,[9] and they are well aware of the feelings of the Thief fan community.[10][11]

Several fans have reacted to the decision to replace Stephen Russell as the voice of Garrett, starting a petition for his return.

Many fans of the original games have shown distaste for some of the things said about Thief in interviews, particularly the lines “We want you to play as a thief, but we don’t want to force you to play as a thief.”  - Stephane Roy and "We wanted to bring him more for the modern audience of today's console market," - Nicolas Cantin, referring to Garrett.

Retrieved from "https://thief.fandom.com/wiki/Thief_(reboot)?oldid=68048"
Community content is available under CC-BY-SA unless otherwise noted.