Start a Wiki
The Trickster 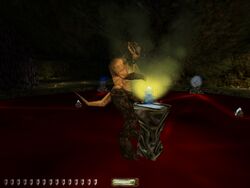 The Trickster (disguised as Constantine) is the main antagonist in Thief: The Dark Project and a Pagan object of worship who represents the chaotic forces of nature. He believed that the world should not progress with technology, and it was his desire to return the world to a more pure form without the great stone and metal buildings, where the forests covered the world and people lived off the land.[2] He was oft-quoted in pagan texts and parchments and is mentioned in Hammerite texts as being an evil god or devil-like entity that opposes the progress of The Builder. He resides in a cavernous realm called The Maw of Chaos; the nexus through which he summons his forces.[3][4]

The Trickster's appearance as well as his role in the Thief series is an amalgam between the Greek god Pan and the Norse god Loki. According to Pagan lore The Trickster is the father of all nature, who gave life to all wild beings, plant life and brought shelter and food to those who respect the wilderness. Some possible depictions have him playing the bagpipes and being in the company of beautiful women.[5][6] 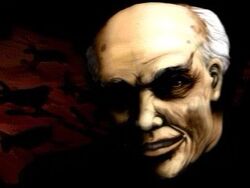 The Hammerite religion depicted him as being a chaotic, god-like entity who wishes to stop technological progress. They called him a dark entity and a false god, describing his miracles as false promises and that stealing is one of his ways. Although the exact connection between The Trickster and the Builder is unknown, Hammerites believe that the Builder came upon humans and offered them tools to work the land, while the Trickster continued preaching about the love for the pure earth to the pagans. It is possible that these two gods have been fighting each other since the dawn of time.

Unlike the Builder, the Trickster was actually recorded in history (via the Keepers and Kurshok) to have walked the earth. The Kurshok described him as being kindhearted, allowing them to construct cities and ships of immense size despite his hatred of those who cut down trees and change the form of raw materials. He had a great fondness of the Kurshok above all other races. But he later banished the Kurshok underground, below the current city docks as punishment after the kurshok king Gruliac, had proclaimed himself above the Trickster's importance, and refused to give him back his crown.[7]

The Pagans are also allowed to built small huts to live in, as well as primitive temples, as seen in Beck o' the Wills. Pagans can also provide themselves with paper and ink, they wear clothes on a regular basis, and even make crude items and utensils for various usage, such as gardening and cooking.

Fifty years before the events of Thief: The Dark Project, the Trickster may have used The Eye in order to start the Cataclysm within Old Quarter, which caused hordes of the undead to pour into the City from a prestigious Hammerite Cathedral. However the Keepers managed to contain the evil by using ancient Elemental Wards on the cathedral, the wards were controlled by four talismans. Later on the City Watch kept the undead at bay and the City Council raised a wall around the haunted section of the city to stop the spreading of undead.

In Garrett's time, the Trickster disguised himself as an obscure and eccentric nobleman named Constantine, who owns a bizarre mansion that is decorated in plant motifs, and collects rare and unusual objects. He tested Garrett's thieving skills by having him steal the sword from his own mansion. After retrieving the sword, Garrett was hired to obtain The Eye for him in exchange for 100,000 of the City's monetary currency.[8] When Constantine had finally obtained the magical artifact, he revealed himself as The Trickster and had Garrett's right eye removed and placed onto The Eye. This seems to give it the power to focus Constantine's magic spell and create a portal to the true world.[1] 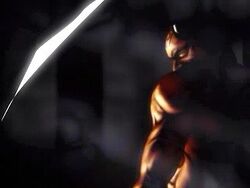 It is unclear as to how the The Eye was created, but it is believed that it might be far older than The City, possibly dating back to the time of the Kurshok Empire or longer. Since the Trickster's third eye is never shown in-game, its appearance in the TDP/TG intro is probably just for show. Its size would also require that it occupies about one quarter of his brain case. The markings seen on his forehead are merely the Pagan eye symbol.

The Trickster had a close relationship with the wood nymph Viktoria, they were "old associates" as she put it. Viktoria acted as his personal messenger and was his main contact with The City officials. Like him, she also disguised herself as a human but was better adjusted in society. The nobles and criminals did not seem to mind her obscure background.

His true appearance was similar to a large satyr or faun of ancient myth, with a thick reptilian tail and the symbol of the third eye emblazoned on his forehead.

It is clear that he commanded vast (if not undefined) mystical power through will and ritual, allowing him to command the four elements, mutate and summon creatures, and distort space itself. He gave the pagans the power to control plant growth and raise the undead and both he and his minions could freely shapeshift between human and beast form. When he travelled in human guise, he took the form of an elderly, balding man, named Constantine.

His in-game persona, "MrCon", was intended to possess three additional powers: elemental summoning, flinging frogbeasts from his hand, and raining fireballs onto his enemies. Due to a bug in the targeting method, however, he cannot use any of these weapons.

After recovering the Eye, he and minions rampaged through the city and attacked the Hammer Temple in Downtowne, reclaiming his ancient subterranean temple in the process. He later returned to the Maw to perform his ritual, but was killed by the exploding replica which Garrett had exchanged for the real Eye.

This did not seem to stop the pagans from worshiping him as they believe that he shall return. It is not known if this is possible.

Enemies, Creatures and Characters
Retrieved from "https://thief.fandom.com/wiki/The_Trickster?oldid=68094"
Community content is available under CC-BY-SA unless otherwise noted.