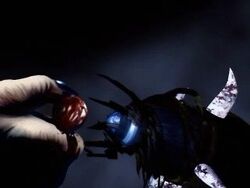 The Eye is a mystical rock, the composition of which is unknown. Experts suggest a combination of onyx, quartz, and bloodstone, although this is likely out of ignorance for the origin of the eyeball structure.[1] The true stone is a pale blue gem encircled with vines that extend outward to form usable claws. When empowered, the stone would emit a scarlet glow.

The Eye may have had a hand in The Cataclysm, though the true cause remains unknown. The Hammer Cathedral where Garrett first encountered it had been sealed off by The Keepers.

The Eye has no master. It had the ability to talk to people like Garrett and others telepathically, and it was also able to move itself by some means. However, it was entirely blind without a real living eye from a victim.[2]

The Eye is an artifact with clear ties to the Pagans. Writings from the Smith-in-Exile suggest that it was once used as a weapon against the Hammerites and subsequently recovered by them and probably used by them.[3] Fifty years before the events of the first game, The Eye had been kept inside the cathedral in Old Quarter. Each morning, the Hammerite clergy noticed its ability to move on its own, usually to be discovered floating on top of the altar.[4] Eventually the cathedral and all of the district fell prey to the undead scourge that originated from the cathedral. According to Keeper documents found inside their headquarters in the Sealed off Section, the scourge was probably caused by the Trickster, and so the cathedral was sealed off using Elemental Wards. It is speculated that The Eye itself played a crucial role in this cataclysm since the undead act as its protectors and because of its connection to the Trickster.

Involvement in The Dark Project

During the events of the Dark Project, Garrett was hired to collect the Eye for an eccentric noble named Constantine. Upon reaching the cathedral, the artifact spoke to him about the Keepers' secret method of opening the cathedral, although it never explained as to why it helped Garrett with his mission. Furthermore, after it was successfully taken off the altar by Garrett, The Eye locked the front gates in order to test the thief's wit. It claimed that he would not escape so easily. But Garrett got away through the cloister gate, behind the cathedral, after assisting a friendly ghost to find its peace and eternal rest.

Upon receipt of The Eye, Constantine revealed himself as the Trickster, and instead of paying Garrett the promised amount, had his consort Viktoria remove Garrett's eye and place it onto the sentient item. The Eye was described as being "blind" since it required a real, living eye to reach its full power. The Trickster brought the Eye back to the Maw of Chaos in preparation for the ritual which would open the gate between the worlds for good. Garrett, however, had followed him and replaced the Eye with a forgery constructed by the Hammerites. Upon completion of the ritual, the fake eye exploded, killing the Trickster in the process.

Involvement in The Final Glyph

The Eye appeared again in Thief: Deadly Shadows as an artifact that Garrett has to steal in order to defeat Gamall.

In Thief: Deadly Shadows it became known that The Eye was one of five Sentients; artifacts imbued with consciousness by the Ancient Keepers, as a safeguard against the "evil to come", later revealed to be keeper corruption. All the Artifacts, and thus the Eye, possessed some measure of sentience, some more, some less. Like the Eye, the Heart and possibly the Crown had the ability to communicate with certain people.[5][6]

The Eye was somehow found and kept at Wieldstrom Museum, there it was put on display as an unknown origin exhibit. It was located at the end of the scepter of a giant statue. When Garrett comes to pick it up, the Eye willingly assists him in his mission, saying that it hopes to one day steal his other eye.

The Artifacts were placed in certain areas of The City on historical landmarks which activated the Final Glyph. This was the safeguard of the Ancient Keepers, should future Keepers become unbalanced. Presumably it could only be activated by the One True Keeper.[7]

The Eye as seen during gameplay in TDP/TG is only the top segment of the entire artifact. The remainder existed as a very short staff with coiled tendrils and a ring of stout tusks or thorn-like projections near the top. Although this version of the Eye was never used, it is still shown intact in the briefing for Into the Maw of Chaos and in the second cutscene. In these depictions and in unused DromEd models, it is shown to have five claws instead of the usual three.

Stranger still is the fact that no alternate model was used for the endgame. Neither the real Eye nor the replica is shown holding a human eyeball.

In TDS, the Eye becomes a black orb with two thorny protrusions at the base. Garrett's eye is plainly visible and apparently encased in a protective clear shield. Both gemstone and eye are abnormally large.