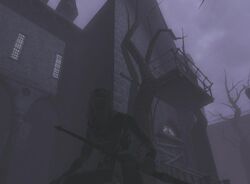 Also known as
Haunted House, The Cradle
Location
Old Quarter, in or near the Shalebridge district
Owned by
(abandoned)
Floors
3
Basement Floors
2

Shalebridge Cradle is an abandoned and haunted building located in Old Quarter, first seen in Thief: Deadly Shadows. The story of The Cradle is known by many of The City, and even more avoid the abandoned gates.

The Shalebridge Cradle used to be an orphanage, and then an insane asylum, at the same time. The children were moved to a separate ward, but shared space with the asylum patients. One night a fire started in the staff wing. No one knows how, but much can be deduced from the facts that the staff were callous and brutal in their treatment of patients, one of the inmates was a pyromaniac, and a lone chair was subsequently found in the ruins, placed so that the sitter would be looking directly at the tower as it burned. The fire destroyed some of the upper portion of the building. After this the building was abandoned. Before the orphanage was closed, two orphans had an encounter with a being called The Hag. One of the orphans, Lauryl, was killed, and the other one, Drept, survived, later joining the Hammerites and spending his life researching the Grey Lady that had killed his friend. During the events of Deadly Shadows, Garrett explores the Cradle and encounters the ghost of Lauryl, who asked for his assistance in freeing her soul from the old building's clutches, saying that it was because the Cradle still "knew her". To release her soul, Garrett had to remove or destroy the objects from her life that held her there (her blood, diary, and nightgown) in order to make the Cradle "forget" her.

It is inhabited by eight to nine Puppets (depending on the difficulty) who are the undead asylum inmates, and also, at times, the shadowy remains of the Cradle Staff. All of the Puppets are found within the Inner Cradle. Additionally, the building has its own memory, mind and will. There is a school of thought that this is the only consciousness present in the building, and that the puppets and staff are not actually undead, animated by some life-force of their own, but simply dead, and manipulated by the Cradle itself as a child might play with a doll. It is even capable of holding anyone who entered it for eternity unless they are freed by outside forces. The only way to leave on your own once trapped, is to convince the Cradle that its victim is dead. Garrett does this by entering the Cradle's past and jumping out of the highest point in the Staff Tower.

Such treatments and therapies were draconian.

Minor cases were simply rest and observation in a low security wing. Medicines like sedatives would sometimes be used in treatments.

Doctor Hanscomb invented and wrote about heat therapy in his book, Heat Therapy to Ameliorate Dampness in Hyper-Emotive Patients.[1]

Doctor Pettihue was very known for using water therapies. The only known action in the water therapy was "submerging".[2]

Heat and water therapies at the time were not even validated; they would experiment on patients.

Electroshock therapy was used, sometimes with disastrous results. Solzer, whether because of an accident or foul play, was given shock therapy and received permanent brain damage.[3] Wet wraps would be administered either during or after shock therapy.

Lobotomies were used on dangerous cases, though little regard was given to the patients' well-being. It was agreed upon by the doctors that failed lobotomies would yield more information about, so it was suggested that training be kept to a minimum in order to increase knowledge.[4][5]

Shalebridge Cradle may be a reference to the (1999) remake of House on Haunted Hill. The film's plot revolves around a party where the guests are at a house which was formerly an sanatorium until a fire many decades before. The characters are trapped when the old lock down system activates and are picked off one by one by the house and each other until it is learned that all the guests are the descendants of the original staff who had escaped the fire. Shortly after the darkness is released, which kills and entraps all but two who manage to escape (out of an attic window). The sequel film explains that an evil idol was responsible for trapping the souls of the patients as well as the other victims in the house. Its removal from the house via a drainage pipe allows the souls to escape.