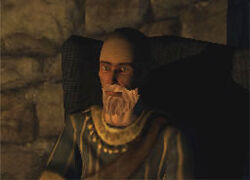 Lord Julian Rutherford was a nobleman and cousin to Lord Ember. Julian and Ember were feuding over the Bloodline Opal, which he had lost to Ember in an archery contest, the results of which Lord Julian disputed.

Lord Julian very much wanted to acquire the opal, and went to the Blue Heron Inn in order to discuss with Lord Ember's cook his plan to steal the opal and claim his place as head of the family. Garrett overheard their conversation and stole Lord Julian's medallion, allowing him to break into Rutherford Castle.(TDS: "Checking Inn, Cashing Out")

Enemies, Creatures and Characters
Retrieved from "https://thief.fandom.com/wiki/Rutherford,_Lord_Julian?oldid=55215"
Community content is available under CC-BY-SA unless otherwise noted.