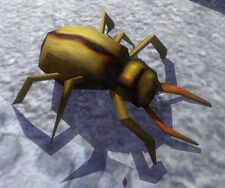 Rust Mites are magical Golden Beetles that first appear in Thief: Deadly Shadows. Since they're enchanted, they can only be killed using Broadhead Arrows after acquiring the Hammer Blessing from the Hammerites.

It takes exactly one Broadhead Arrow to destroy a mite. Be careful who is nearby, as the mite will explode with a large noise, causing nearby civilians and guards to be alerted and come looking for intruders.

As the rust mite is sturdy and normally invulnerable, objects can be broken over it without doing any harm. This can be useful in some locations as bursting crates and barrels produce loud distracting noise and explosive barrels can be easily detonated in narrow back-alleys to deter pursuers; in Stonemarket Proper for instance.

For every mite he kills, Garrett's faction status with the Hammerites improves, causing them to ignore or even protect him. If Garrett kills all 15 mites, a curvy pipe will appear in Garrett's Apartment, hanging from the ceiling over the raised section of planks, as well as a message from Brother Wimble, describing the apparatus.[1] This acts exactly like a Healing Font and does not obstruct the Pagans' reward.

Despite their appearance of enormous stag beetles, these creatures are inspired by tiny arachnids of the Gall Mite family that feed on plant leaves, causing discolouration similar to that of fungal rust.[2]

Enemies, Creatures and Characters
Retrieved from "https://thief.fandom.com/wiki/Rust_Mite?oldid=65556"
Community content is available under CC-BY-SA unless otherwise noted.