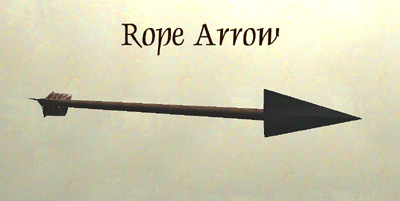 Areas they can be found: in equipment shops or storage areas, in areas where past expeditions camped or traveled

They are the only tool, except the Vine Arrow, which can alter a thief's route. First, the Rope Arrow must be shot into a surface it can stick to. Which is made of either wood or grass. It can stick to either ground, walls or ceilings.

If the arrow hits a bad surface, like stone for instance, it will be wasted. When the arrow sticks successfully, it produces a rope.

The one end of the rope is tied to the arrow and the other descents to the ground, until it reaches a solid surface or its maximum possible length. In this way the Rope Arrow provides a new path for the thief.

From that point the rope can be climbed or descended, jumped onto or jumped off.

The Rope Arrow itself can be picked back, like a normal Broadhead Arrow, but the moment it is, the rope disappears. That means that if the arrow is removed while the player is on the rope, they will fall to the ground.

The Rope Arrow is not as critical as the Water Arrow or Gas Arrow for example, when taking quantity into consideration, because it can be picked up after each use. The point is to have at least one in the starting inventory in every mission, when it's possible. Rope Arrows come in use in almost every adventure Garrett undertakes.

There are two main ways of using Ropes as a means of getting somewhere. One is to search for a good surface near a high balcony, a platform or an edge on which to step up to after climbing up. When the arrow is shot, for example, onto a wooden support near a terrace, jump from the rope to it.

The second method is shooting a Rope Arrow directly on a good surface, like a tall crate or a wooden beam, and when it is climbed up, reach the arrow itself as well as the edge of the surface, and mount on it.

Both ways are good for discovering new areas, making entry into a building from a high window or balcony, moving through alternative routes, moving above loud surfaces or traps (when possible), or simply finding a good high spot for scouting around or shooting with the bow without being seen.

The Rope Arrow is a very good tool for discovering hidden loot or searching for secrets.

There is also a trick that can be used when facing patrolling or searching guards. If Garrett is in a narrow corridor with a wooden ceiling and a guard is coming around the corner, stick an arrow to the ceiling and climb on it. If he is high enough, the guard won't see or feel the rope.

Although weapons are disabled when climbing for obvious reasons, an already raised weapon or nocked arrow will remain brandished even after grabbing onto the rope. In T2, this can be done in mid air so, provided enough wooden surface and arrows, Garrett can build a "rope bridge" over any distance.

Also, with the right timing, Garrett can cross the same span once using as little as three rope arrows (also T2 only). After shooting the first two from the starting point, climb as high as possible up the first rope, plucking the arrow and jumping to the next one simultaneously, and nock the next arrow in the air, ready to drop the next line by the time Garrett reaches the second rope (the third arrow is only needed to avoid having to re-select the rope arrow after every use). This can be repeated indefinitely but does not result in a permanent bridge.

Another ill situation can be when the arrow is stuck in an inconvenient way: either the rope is too close to a wall so the player cannot jump on it, even if he can reach it, or the arrow is has a good height but the rope reaches a hard surface before it gets fully stretched.

Apart from climbing the Rope Arrow has similar properties as the Broadhead Arrow. They can be used to push buttons from a distance or distract patrolling guards.

In Thief: The Dark Project and Thief Gold Rope Arrows cause no damage to any creature or human, but in Thief II: The Metal Age they cause damage the same way as Broadhead Arrows. The best thing is they have the same Stealth Bonus, which allows them to kill a character with a single shot. The same creature restrictions however are applied as the Broadhead Arrow, which means that Tree Beasts and Mechanist Robots are immune and Undead take only one point of damage.

Rope Arrows are much more expensive than Broadheads and should only be used as a back up method of assassination in Thief 2, or pushing buttons and distraction when there is nothing else in the inventory to use.

Except its slightly brighter tone, the Rope Arrow looks just like the regular Broadhead Arrow. Its shaft, fletching and head are the same in proportions and structure. However, the Rope Arrow's mechanism is totally different and known only to the most skillful weapon artisans and craftsmen.

When the arrow itself is shot into a wooden surface, it sticks to it firmly. After the arrow has calmed down, it releases a hanging rope from a point just above the fletching. When the rope has developed in its full length or has reached a hard surface in its way developing it stops. Then the arrow and the rope can be used as a means of climbing up a wall or another structure.

The arrow and the rope themselves are strong enough, to support a full grown individual, even if the arrow has not penetrated the wood that firmly.

Some credulous blacksmith apprentices believe that the arrow has magical powers, but this is due to them being unable to produce a fully working Rope Arrow.

Weapons
Retrieved from "https://thief.fandom.com/wiki/Rope_Arrow?oldid=64127"
Community content is available under CC-BY-SA unless otherwise noted.