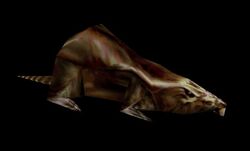 Rats in the Thief Universe are almost characters of their own. They inhabit every dark and dank environment, from sewers to chapels and large mansions. They are seen on many levels of T2 and TDS, as actual rodents scurrying about. They can be killed, but are in no way hostile. The Rat does react to Garrett and runs away, but it does not alert any nearby guards. The rat is larger in Thief: Deadly Shadows, but they still pose no threat to Garrett and can be killed with a Dagger.

The rat's natural predator is the Cat.

Azaran the Cruel started using rats and insects for his necromancy work.[2]

Even though many guards and servants blame all sorts of noises on rats, no rats are seen causing any hostile NPC concern, or causing any source of noise or trouble whatsoever.

Rats are blamed for minor sounds and sightings of Garrett's mischief, though it's generally exaggerated that all disturbances are blamed on rats.

Mechanist Robots or Masked Servants are never heard blaming rats, although glyph statues are.[3] Sometimes when one of the male Mechanist hears a suspicious noise, he complain about rats: "Rats would be wise to scurry elsewhere...", suggesting an interesting metaphor between the thieves and the rats, for the sneaking peculiarities and the dirty habits that both of them have.[4]

The rat is not hostile. In TDS, it is immune to Gas Arrows (but not Gas Bombs), does not slip on oil or choke on moss, and cannot be blinded. It squeaks and runs away if Garrett steps or drops something on it, but will not alert anyone to his presence. In fact, people usually stop looking after they see a rat, concluding that it had been the object of their search all along.

It will not notice or be noticed by a cat, even when right beside it.

At one point it was considered that Garrett's size would be reduced and the enemies would be the rats; using cheese as lures, and using the Rope Arrows to climb up tables.[5]

In DromEd Deluxe (aka DedeX), if the levels origin is not secure, the game will be flooded with suicidal rats,[6] due to the instability of placing objects at the direct center (0, 0, 0).

In DromEd, if the "small creature" box is not checked, then the in-game rat will fall and get stuck in floor traps, and be able to climb stairs.

Enemies, Creatures and Characters
Retrieved from "https://thief.fandom.com/wiki/Rat?oldid=73581"
Community content is available under CC-BY-SA unless otherwise noted.