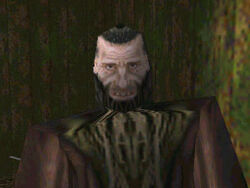 Raoul was a hermit who used to be a talented opera performer, and owner of the Opera House in Old Quarter.

At some point, for reasons which are unclear, Raoul lost ownership of the Opera House to Lady Valerius, who dismissed him and his entire staff. As the former owner of the opera house, Raoul had detailed knowledge of the secret passageways within the building, and had wanted to take his revenge on her, but he eventually came to realize that he did not have the skill or the nerve required to do so. Instead, he made nightly raids on the Opera House, stealing food, wine and the like.[1]

After his dismissal, Raoul took up residence in a shack in the caverns below the opera house, where he slowly went insane. It was in these caverns that the water talisman was hidden by the Keepers, and Raoul witnessed Captain Colliard bringing the talisman back to the opera house for Lady Valerius.[2][3] He was one of the few outsiders who knew of the existence of Keepers.[4]

Raoul is harmless and will not attack Garrett or alert any guards. He will simply ramble on about the opera house and Lady Valerius and perhaps hum a tune. There is no need to attack him at all, and in fact it is better not to, as he will provide his own special map of the Opera House, a key to the secret door in Valerius' office, and some useful information as well.

When he is finished speaking to Garrett, Raoul steps back into the doorway of his modest hovel, utterly blocking ingress and egress. He cannot be moved by non violent means, so it is best to look in during the dialogue.

His name is most likely a reference to the character Raoul, Viscount of Chagny, in Gaston Leroux's novel 'The Phatom of the Opera'.[5]

Enemies, Creatures and Characters
Retrieved from "https://thief.fandom.com/wiki/Raoul?oldid=60198"
Community content is available under CC-BY-SA unless otherwise noted.