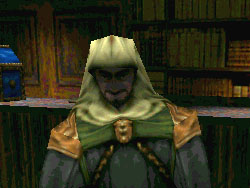 Ramirez was a nobleman and one of the City Wardens, responsible for several of the crime rings in The City. He lived in a large mansion in Hightowne, protected by his own personal house guard. To Ramirez, money was a top priority, and he was ruthless toward those who did not pay him what he was due.

As a city warden, Ramirez was in charge of the crime rings in Hightowne, South Quarter and Downtowne. He was the direct boss of Lord Bafford, and would collect weekly cuts from his gambling dens.[1] He also held power over a few of the City Watch officials, who received bribes in exchange for their loyalty.[2] Ramirez possibly had some sort of alliance or agreement with the Downwind Thieves' Guild, among whom it was understood that no jobs were to be done on any of Ramirez's people.[3]

Ramirez, along with other city wardens, had tried at least once to get Garrett to join his "stable". As Garrett had refused, Ramirez finally got impatient and sent two Assassins to deal with him. They were ultimately unsuccessful, however, accidentally killing Farkus instead.

Ramirez was a practical man and valued his coin above all else. He often spent his nights in his basement room counting his money and assessing his business deals.

He had no reservations about using extreme force against those who defy him, such as Garrett, Joff or the Stone Group, and would often send his tough boys to break the legs of interlopers.[4] With his debtors, he advised his "boys" to break or remove their fingers, instead, so as not to prevent them from paying.[5] Lord Bafford, however, felt perhaps Ramirez went a little too far in these matters.[6]

Ramirez liked comfort and luxury as well as exotics. He was quite pretentious and required complete thoroughness from his servants, who occasionally remarked on his strictness.[7] He often ordered meals at all hours of the night while working in his basement room, and had a bell system connecting his room to the kitchen for this purpose. He appears to have had some affiliation with the Hammerites, judging by his many Hammer banners and his tendency to shout "Builder's Gold!" upon finding a corpse.

Ramirez was also the only one in the City who kept Burricks as pets. They were kept in a large basement pen complete with living quarters and drinking well, enclosed by a short ledge. Despite the warning of Tol Camrick & Sons regarding burrick tunnels, he refused to move them.[8] Tending to the burricks was perhaps his servants' least favourite tasks.[9][10]

Ramirez was invited by the Mechanists' Party at Angelwatch to receive a Masked Servant, but he did not respond to the invitation.[11]

Although there is no information on Ramirez's death, his tombstone can be found in the catacombs of Fort Ironwood, and his absence is noted at least once during the events of the second game.[12] It is possible to kill Ramirez without failing the mission, on the easier difficulty settings.

Ramirez will remain in his basement room as long as the alarm is not sounded. His health is quite high, which is normal for a story character and boss-like NPC, but he is slow in both attack and movement speed.

He also behaves a bit foolishly; unlike the house guards, who would rather try to activate the alarm or run for reinforcements when engaged, he won't bother to push the alarm button in his chamber and will simply chase Garrett angrily around the place.

While in his room, Ramirez stands with his back to the door most of the time, so it is much more advisable to knock him out or simply avoid him entirely rather than engage him in a sword fight.

Enemies, Creatures and Characters
Retrieved from "https://thief.fandom.com/wiki/Ramirez?oldid=67473"
Community content is available under CC-BY-SA unless otherwise noted.