Start a Wiki
Trail of Blood 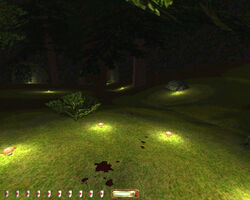 Trail of Blood is the ninth mission in Thief II: The Metal Age. Having followed the wounded pagan into the mysterious portal, Garrett emerges far outside The City and must follow the trail of blood left by the pagan to find out where he's gone and what is going on.

The portal deposits Garrett in a grove of trees far outside the city. The wounded pagan is nowhere in sight. Garrett follows the trail of blood to find out where the pagan has gone, although he has no idea where he is or what he will be up against. Along the way he finds that a pagan village has been occupied by Mechanists who seem to have embarked upon a campaign of extermination and have murdered the villagers. Upon going through another large portal he eventually finds himself once again in The Maw of Chaos, where Garrett once defeated the legendary pagan god known as The Trickster. Along the way he finds several letters between Mosley and the pagans, which reveal that Sheriff Truart was hired by the Mechanists to kill him.

There are no secrets on Trail of Blood

Missions
Retrieved from "https://thief.fandom.com/wiki/OM_T2_Trail_of_Blood?oldid=67864"
Community content is available under CC-BY-SA unless otherwise noted.