You may be looking for the bank of the same name. 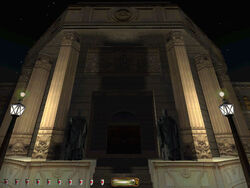 Garrett has learned from the meeting that the Mechanist leader, Karras, is turning living humans into mechanical "servants" for purposes not entirely known. He has developed a kind of weapon that can turn people into rust and demonstrated the process in front of Sheriff Truart. Truart has promised to supply twenty lower class subjects, such as prostitutes, street scum, and so on, for Karras to produce more servants. The incriminating meeting was recorded by Karras for collateral and the recording placed in a safe deposit box at First City Bank and Trust. It is one of the wealthiest establishments in town, catering to the financial needs of the City's upper crust. Garrett wants the recording to exert a little pressure on Truart and find out who has hired him to kill him. The safe deposit boxes are in the huge bank vault, and the bank is well-protected by the Mechanists' security machines and the usual guards. Since Garrett made a copy of the key while he was in the Eastport Mechanist Seminary, he should be able to open the box, grab the recording and get out.

NOTE: The quantities and placement of the guards, cameras, and bots are randomized each playthrough/restart. Exceptions noted above.

The other main alteration is to the small drainage pool in the basement. On Normal there are 5 water arrows to be found there, while there are only 4 on Hard, and 2 on Expert.

Claiming: On the wooden platform there is a switch at the bottom left. It opens a door underneath the platform.

Loot: a speed potion and a healing potion (as well as some Water and Moss Arrows on the Normal setting)

Claiming: There is a switch behind the second statue on the left. It opens up a small secret room in a nearby office. Back in the hall with the camera(s), go north, then clockwise to the office.