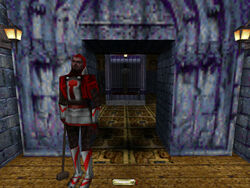 The Hammerites took the other half of the "keys" and keep the talismans of Air and Earth somewhere inside the city's temple. Since the place is crowded and active 24 hours a day Garrett decides to enter in disguise. His contacts get him the uniform and reference to enter as a novice. Novices are not allowed to speak while in temple and can move about the place almost freely. Plenty of sneaking is necessary to get into forbidden areas however. The temple is not a particularly large building. It has two main floors with barracks and other quarters, a chapel, garden and a cellar which connects to vaults that contain a number of tombs. The temple has a large population of Brothers and an alarm system. The challenge is first in finding where the talismans are then dealing with the elaborate security system that protects them.

All characters in this mission are set to neutral at the beginning, and depending on your actions may turn hostile.

In The Dark Project both Air and Earth Talismans are located here. In Thief Gold, the Earth Talisman has been moved to its own separate mission, and Garrett is going to the Hammerite Temple only for the Air Talisman.

As Garrett mentions before starting the mission, the guards will be suspicious over certain behavior. Below are some notable things to keep in mind: