Start a Wiki
The Haunted Cathedral 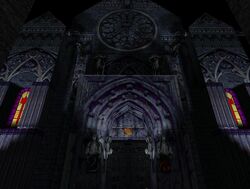 You may be looking for the place of the same name.

The Haunted Cathedral is the seventh mission in Thief: The Dark Project and the eighth in Thief Gold. Contracted by Constantine, Garrett enters the Sealed Section of Old Quarter to acquire for him The Eye from the abandoned Hammerite Cathedral.

This mission introduces Apparitions and Craymen.

The Hammerite Cathedral in question is in an abandoned section of Old Quarter that was walled off decades ago. While the details of the cause of the disaster are not fully known, rumors tell of hordes of Zombies and raging fires. Garrett must make his way through the ruins to the cathedral. This mission is made up mostly of burnt out and collapsed buildings obscuring overgrown and leaf covered streets. The way through to the cathedral on the hill is not straightforward. Ghosts and Zombies as well as other fauna have taken over. It is also pitch dark and one of the necessities is finding and starting up the old power grid. Upon arriving at the cathedral it is found to be sealed with magical wards, a plaque reading "Warning: Great evil resides in this place, and it is no longer fit for men. The doors are sealed to protect us from that which lies within. Do not remain here". At the rear of the building The Eye itself speaks through an open window, telling of a secret place in a nearby grotto with information on how to get the door open. Inside is found a trap-ridden and abandoned Keeper library with scrolls and a table map of the city telling where the "keys" lie.

There are no changes in the level's structure, throughout all difficulty settings. In general there are more horrors wandering the area on higher settings. There are also more Burricks wandering near the Cathedral on Hard and Expert. There is an extra Apparition roaming the streets and a Haunt in the house where the Serpentyle Torc is placed on Hard and Expert. The Zombies and Craymen also appear in more quantity on higher difficulties. Those who play on Normal will benefit from and extra Light Box key, on a window near the drawbridge before Market st., which is easier to acquire than the only available key on the other settings. The only affected piece of loot, is a chest with a necklace worth 100 gold, missing on Expert.

The only difference between the two editions is the presence of a new enemy, the Fire Shadow (which is present in Thief Gold). It serves as a supply of Fire Arrows for the torch puzzle.

The Sealed Section may have helped influence the town of Ravenholm (seen in Half-Life 2) since both are abandoned, have had an extremely violent and bloody event, and are populated by the undead or some other form of creatures. In Ravenholm, the undead are parasitic zombies, and the event was a shelling, and contained in the shells were the headcrabs. And though there is a church, it is seen as a temporary safehouse. Backing this theory up is the fact that Mark Laidlaw, the primary writer for the Half-Life series, has named Thief as his favorite PC game of all time.[1]

Inside The Cathedral there are three Hammer Haunts and two Zombies wandering around. They can be seen through the window near the Eye and killed, but this will not affect the enemy count in Return to the Cathedral.

The ambient music that plays in the smaller Keeper library in this mission will become a major leitmotif for the Keepers in the soundtrack to Thief: Deadly Shadows.

It is possible to get into the Cathedral through window due to bug. Get close to the window, turn around and jump. Once inside, Haunts are not hostile but the zombies are. Exit the Cathedral by using same bug on another window at second floor room to the right of altar with The Eye.

Missions
Retrieved from "https://thief.fandom.com/wiki/OM_T1_The_Haunted_Cathedral?oldid=71582"
Community content is available under CC-BY-SA unless otherwise noted.