Start a Wiki
You may be looking for the mansion of the same name.
Lord Bafford's Manor 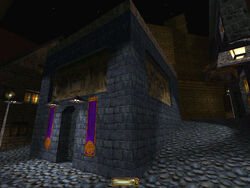 Some time after leaving the Keepers, Garrett takes a simple job: "Break into a guarded mansion, steal another fat nobleman's priceless trinket and leave quietly" (just how long it has been since Garrett's training is never stated, but the kind of job he is willing to attempt and the connections he has made suggest he has established himself in the meantime). Garrett's task, given by his fence Cutty, is to steal a valuable scepter from a large manor while the master is away.

The mission comprises the entire manor (three floors plus vaults and cellar) with some surrounding streets. The player begins the mission near the guarded front gate of the house. Note that on Normal difficulty it is only necessary to pick up the scepter to complete the mission. On higher difficulties the player must also exit the building.

Guards and servants won't bother you in the streets.

There are no changes in the level's structure throughout the different difficulty settings. In general the second floor of the Bafford mansion, becomes more crowded with guards on Hard and Expert. Those who play on Normal will benefit from an extra throne room key in Bafford's bedroom, which makes its acquisition easier. 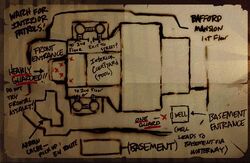 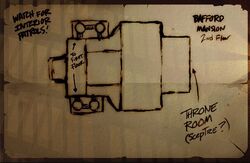 Missions
Retrieved from "https://thief.fandom.com/wiki/OM_T1_Lord_Bafford%27s_Manor?oldid=66552"
Community content is available under CC-BY-SA unless otherwise noted.