Start a Wiki
Down In The Bonehoard 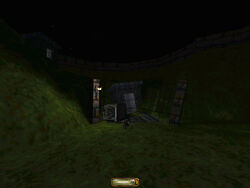 Down in the Bonehoard is the fourth mission in Thief: The Dark Project and Thief Gold. It takes place inside the Bonehoard, a massive underground complex of haunted crypts that has fallen into disrepair. Garrett starts out at the entrance to the Bonehoard and must delve deep into its depths to locate and acquire the Horn of Quintus, and in higher difficulties, the Mystic's Heart and Mystic's Soul.

Now without a reliable fence and stuck for money, Garrett decides to use the lead Cutty gave him and go after the Horn of Quintus for himself. The horn is said to be somewhere deep in the "Bonehoard", the catacombs on the outskirts of the city, and Felix and friends have a head start.

The mission comprises several sections of sprawling underground tombs which are linked by the tunnels of the poison-gas spewing creatures called Burricks (the mission is their introduction). The largest of these is the Halls of Echoing Repose with its interconnected octagonal towers that are several stories high. The Horn can be heard mysteriously blowing its mournful tune throughout. The mission contains several side quests and some secret objectives. On higher difficulty levels other treasure is added to the objectives besides the horn and new areas are opened up. The player also has to return to the surface.

The player begins the level with the following gear:

Note that the starting gear for this mission is the same on all difficulty levels.

The following items are available for purchase at the beginning of the mission:

The following characters appear in this level...

There are no changes in the number of creatures between the different difficulty settings. The only structural changes are the presence of metal doors blocking the way to the Mystic's Soul on normal and the Mystic's Heart on normal and hard. The main differences concern the clues available to Garrett regarding the location of the Horn of Quintus, and the amount of loot. The higher the difficulty, the more information and less loot around the map. Sutter's diary has three different versions - one for each difficulty. The expert version mentions the X-shaped marks in the Burrick tunnels, which are not present on normal and hard. Some texts, including Marcus's diary and Adolpho's notes on normal, and the M4HEART papyrus on normal and hard are also missing.

The main difference between the two editions is the presence of a new enemy, the Fire Shadow, in Thief Gold. It serves as a supply of Fire Arrows for the torch puzzle. The map designers made a number of changes to the level in the Gold edition. There is a deep hole in the Burricks' tunnels that is not present on the Gold edition. Additionally, the ledge leading to the Marad tomb was changed to be made out of wood, so one can stick a Rope Arrow into it. In addition, some of the textures were changed, with the intention of give various areas more distinctive landmarking.

If all of the Golden Bones are collected and thrown in the Hammer Shrine sarcophagus, a bonus of 8 water arrows, 4 fire arrows, and 1 vial of holy water will be given to the player.

Missions
Retrieved from "https://thief.fandom.com/wiki/OM_T1_Down_In_The_Bonehoard?oldid=66332"
Community content is available under CC-BY-SA unless otherwise noted.