For the enemy combatant, see Assassin 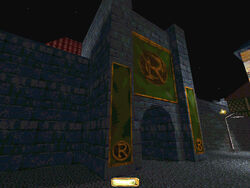 Assassins is the fifth mission in Thief: The Dark Project and Thief Gold. In this mission, Garrett initially intends to loot the local Hammer Temple, but after a failed assassination attempt by Ramirez, he decides to teach him a lesson instead.

This is the first mission to feature Lock Picks.

Garrett sells the Horn of Quintus for a tidy profit and decides to buy a new set of thieving tools from the merchant Farkus. His prices are steep, as few merchants are willing to sell to an independent thieves, but Garrett prefers his independence to working for the City Wardens, who would take a cut from his haul. As a result, the wardens have been threatening Garrett over his independent status for some time now.

Initially the objectives state that the mission involves trying out the new lockpicks in a bit of random burglary at the Hammer temple. However, things change quickly. The mission begins in Farkus' shop as an arrow flies through the window and kills him. The arrow was meant for Garrett, and the task now becomes tracking the assassins. Most of the mission area is a large, convoluted section of The City's streets which the player must tail the assassins through.

The second part of the mission begins at the mansion of warden Ramirez, who sent the assassins. The mansion is sizable, having two floors along with a basement and a courtyard. It also has a large compliment of guards, servants and an alarm system. Garrett decides to teach Ramirez a lesson by stealing the purse of gold off his belt in his own home. The difficulty level alters the complexity of the route the assassins take through the city as well as the amount of guards that patrol the streets if the alarm is triggered.

This mission is little affected by the change of difficulty, except the objectives count. The points at which the Assassins stop on their way back to Ramirez's mansion vary to some extent, between the difficulty settings, but they will choose any of the three possible paths regardless of the last. The only items affected by difficulty are a couple Moss Arrows in Farkus' shop, not present on Expert.

Missions
Community content is available under CC-BY-SA unless otherwise noted.