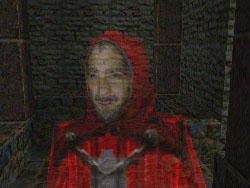 This person lived during the time of the Catstrophe.
Health
Maximum
Invincible
Flees at
never
Attack
Primary Attack
cannot attack

Brother Murus was a Hammerite Priest who died 50 years before Garrett's time, previous to the undead catastrophe in Old Quarter. He lived in the Hammerite Cathedral until his untimely demise in the work yard under suspicious circumstances.[1] Unfortunately for him, his spirit didn't make the journey to The Builder's Paradise, so he existed for many years as an apparition, wandering the halls of the cathedral complex seeking peace.

Garrett entered the Haunted Cathedral to get The Eye for Constantine, but after he collected it from above the altar, the Eye sealed the doors, forcing him to find another way out. It was then that Garrett encountered the spirit of Brother Murus, who helped Garrett escape the complex in exchange for performing a ritual to set the priest's spirit free. The ritual requires Murus's rosary, his candle, a Prayer Book, and a blessed Holy Symbol.

Although it is not triggered in-game there is a recorded speech where the Eye says: 'Poor Murus! Still struggling against me all these years. He's gone quite mad I fear,'[2] Murus does seem to acknowledge his own confusion.[3] Murus seems to switch his perception of the Cathedral. Sometimes he sees it at the height of its glory,[4] and other times he sees the state of disrepair[5] and infestation of the undead.[6] He does the same with Garrett, sometimes seeing him as an initiate,[7] and other times recognizing him as a thief[8] (and even at times, mixing them both together[9]). He also has a habit of giving terse directions without very much explanation. Murus was also a devoted man to his faith even as a ghost, waiting to enter the Builder's Paradise and retaining all knowledge regarding the cathedral and of the sacred rituals and Hammerite proceedings. [10] This information became useful for Garrett in order for him to leave the cathedral.

As confusing and quite frankly, frustrating as he may be, he is a welcome relief to a player who has only seen Haunts and Zombies so far. He is quite friendly, polite and jovial, happily greeting Garrett when they first encounter each other.[11] He even lets Garrett borrow his rosary, with an air of unglued cheerfulness.[12]

Enemies, Creatures and Characters
Retrieved from "https://thief.fandom.com/wiki/Murus,_Brother?oldid=73624"
Community content is available under CC-BY-SA unless otherwise noted.