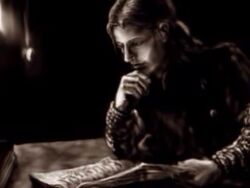 Lieutenant Mosley was second in command of the City Watch under Sheriff Truart, serving as one of his two lieutenants alongside Lieutenant Hagen. She was a Pagan sympathizer, but also a solid, honest officer. Her conscience eventually caused her to question Truart's brutal methods, despite her admiration of the way he had cut down crime.

Although Lt. Mosley's performance had always been exemplary since she started working on the Watch, it began to falter after Truart's reforms, which Lt. Hagen referred to as a 'new age.' Although she respected Truart, she often questioned his orders, sometimes almost to the point of insubordination, much to the dismay of Truart and Hagen. Her concerns were due in part to many of the new Watch officers having formerly been criminals, several of whom she had arrested herself, but primarily it lay with Truart's vow to destroy all Pagan influence in The City. He believed the Pagans to be a poison corrupting the minds of honest people.

Mosley eagerly took charge of the assignment to eliminate the Pagans, and then used her authority to subtly delay and obstruct the operation in order to protect them as long as she could. The lack of results deeply concerned Truart. He started to consider reassigning the task to Lt. Hagen, but because he respected her for all she had done in the past, he decided to give her one more chance.

It seemed though that Truart no longer trusted Lt. Mosley entirely. When he gave her a new key to the evidence vault and secure records room, small things began to disappear from the vault. Although he assigned her the task of solving this problem, he also secretly assigned Lt. Hagen to the same task, likely to test how much he could trust her.[1]

Mosley suspected Truart was in some way connected to Madame Volari's brothel, but she had no way to prove it. There were others in the City Watch who had doubts about Truart and thus Hagen as well, and felt that Mosley was the only one they could trust.[2]

In response to Sheriff Truart's crackdown on Pagans and her fear of losing her assignment to Lt. Hagen, Lt. Mosley, working with the Pagans, orchestrated Truart's murder through a covert Pagan assassin. Unfortunately, the assassin was sloppy and dropped a keyring at the scene of the crime which could be traced back to Mosley. This keyring was the reason Garrett began to investigate Mosley, as he had come across it soon after the murder.[3] In actuality, the keyring was dropped on purpose, indicating that Mosley would have been a means to an end for Viktoria. Mosely admits she is a novice in conspiracies, but owing to her excellent service, she likely was blinded by her sympathies. [4]

Lt. Mosley had a love of plants. She kept a garden which was very dear to her, and although it was becoming increasingly hard to care for it and protect it from the elements, she refused to give up on it.[5]

It is unknown as to what happens to Lt. Mosley after Garrett loses sight of her in trace the courier as there is no further contact or correspondence with her, although it is most likely that she was never detected as being a Pagan by the authorities.

Lt. Mosley appears in the the Thief 2 mission, Trace the Courier. She cannot attack, but basically it is best not to engage her at all. If she becomes aware of Garrett during the first part of the mission, it will become impossible to find her contact and the mission will fail.

Lt. Mosley wears the same blue uniform of the Watch. On her upper arms are three bands, denoting her rank at Lieutenant. Above that is a symbol, probably representing her being in command staff to the Sheriff. Like the Sheriff Sergeant, she has blue gloves. She is helmetless, though is probably a game design, for the player to spot her red hair if they lose her.

Enemies, Creatures and Characters
Retrieved from "https://thief.fandom.com/wiki/Mosley,_Lieutenant?oldid=68493"
Community content is available under CC-BY-SA unless otherwise noted.