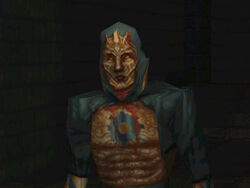 The Mechanist masked guard is a Mechanist guard who has been fitted with a slave mask. Mechanist Masked Guards are found only in Soulforge Cathedral. They are armed with Mechanist Maces, and although they speak in the same timid voice as Masked Servants, like the Hammerite Haunts- they are as aggressive as any regular Mechanist guard, and will attack relentlessly.

The masked guards were created in a similar way to the Masked Servants, in a mostly unclear process involving Precursor masks recovered from the Lost City Karath-din. The primary difference between the masked servants and guards was the subjects used to create them: servants were created from beggars, petty criminals, and the like, while masked guards appear to have been members of the Mechanist Order.

The reason for the creation of the masked guards is unclear, though the journals of Brother Kelsus suggest that some Mechanists had begun to have doubts about Karras and his plans.[1][2] If this were the case, Karras may have realized, and used the Builder's Children to remove their doubts by converting them into slaves in the form of masked guards. A journal entry left behind by Friend Manus also revealed that Karras had been planning to make more servants, as there were some things the Children could not manipulate with their appendages as well as a human could. When pressed by Manus as to why he would even need more servants for such a thing when he had his followers for such work, Karras briefly exploded in rage, then changed his mind and bid Manus adieu.[3]

The method for affixing these masks to the masked guards appeared to differ from the clean method used for masked servants; masked guards typically were left with streams of dried blood on their mask and armor. This suggests that the process was possibly hurried, with no time to clean up after the process.

Retrieved from "https://thief.fandom.com/wiki/Mechanist_Masked_Guard?oldid=73709"
Community content is available under CC-BY-SA unless otherwise noted.