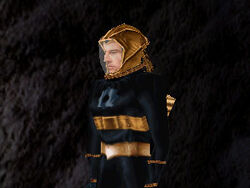 The Mechanist frogman is a Mechanist outfitted in diving gear, including a helmet and portable light, and armed with a Hand Bow. The frogman can be found in Precious Cargo. Unlike typical crossbow-carrying guards, the frogman is always male.

Mechanist frogmen were a special division of Mechanists trained for working in wet areas, and were outfitted with special diving suits. These divers were sent to work in Mechanist undersea operations, such as the Mechanist base below Markham's Isle.

The full suited diver is the ultimate bane to Garrett. He has a portable light, cannot be knocked out by any means, and cannot drown. Other than the normal methods of killing, he is best left alone.

When killed, the frogman will continue to emit light, even when carried, which may be useful when flares are scarce.

These characters are only found beneath Markham's Isle in the T2 mission "Precious Cargo" along with crossbow divers, and mace divers.

Enemies, Creatures and Characters
Retrieved from "https://thief.fandom.com/wiki/Mechanist_Frogman?oldid=47779"
Community content is available under CC-BY-SA unless otherwise noted.