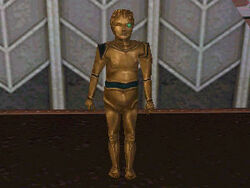 Health
Maximum
10, but cannot be injured
Flees at
always

The Mechanical cherub, also known as a "Golden Child" or "Golden Cherub", is one of the Builder's Children. It is a small, golden robot made in the image of a boy.

Very little is known about this small robot. Garrett first encountered a cherub in Angelwatch, and again inside Soulforge Cathedral. Although its purpose is unknown, it was more lifelike and agile than any of the other Builder's children, which may indicate that it was among a second generation of Karras's creations.

It does not "talk" like its brethren, but it does make squeaking, clicking, and whirring noises.

When first encoutered, the mechanical cherub appears literally out of thin air after reading The New Scripture of The Master Builder in Karras' room in Life of the Party. It is unarmed, and will run for help as soon as it spots any trouble. When it has nowhere else to run, it assumes karate-like hand positions. While it doesn't attack, it does follow Garrett around until it can find a guard. The cherub will also occasionally stand in a random spot and repeatedly thrust its hand forward, as though pressing some nonexistent button, or tug a nonexistent shirt.

The cherub will try to contact a nearby servant at Angelwatch, but will be ignored.

The mechanical cherub is immune to all forms of attack, and is best avoided, as it will simply alert any nearby guards. The only thing that can affect it is a simple Flash Bomb. It will behave like a human when blinded; walking slowly with its hands feeling in front of it. He can be also lock in the room with the scripture by the key and he won't be able to open it.

The mechanical cherub was likely added by the developers simply to give players a jump.

Enemies, Creatures and Characters
Retrieved from "https://thief.fandom.com/wiki/Mechanical_Cherub?oldid=68003"
Community content is available under CC-BY-SA unless otherwise noted.