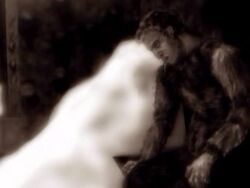 Faction(s)
Pagans
Allies
Viktoria, Garrett
Enemies
Mechanist Order
First Introduced
Thief II: The Metal Age
Lotus was a pagan, an agent, and 'trusted friend'[1] of Viktoria. He was sent to spy on, and sabotage Mechanist operations on Markham's Isle, but he was captured and locked away in the Mechanists' freezer after damaging a Combat Bot [2]. Lotus was close to death when Garrett found him. He gave Garrett the key and all the information he could give about the Cetus Project and the ship that bears the same title. He pleaded to Garrett to 'returns him to the green', and Garrett ended his pain.[3]

Garrett's meeting with Lotus served as a turning point for him. The emotion was evident in his voice when he uttered the words, "Karras must be stopped!" Even though Garrett was a hardened criminal, he showed mercy by fulfilling Lotus's last wish (of course, he will die almost immediately after the meeting anyway). It was probably one of the only times Garrett ever used the word 'friend' in its true and honest form.

Retrieved from "https://thief.fandom.com/wiki/Lotus?oldid=73817"
Community content is available under CC-BY-SA unless otherwise noted.