Lock picks are an essential tool in the arsenal of any thief. It allows a thief to open locked doors and chests. While they can create noise, it is shorter than finding a way around or hunting for a key, and is much quieter than bashing down a door with a sword. 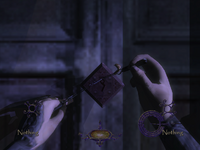 Lockpicking in Deadly Shadows plays a more involved role. Unlike before, where the type of lock as well as how fast the picks could be switched determined how fast the lock could be broken, the player now has to "control" Garrett to open it.

The objective is to find the "sweet spot" in the lock, and pick each tumbler, one-by-one. The player moves the pick with the mouse to probe the tumbler needed to solve the puzzle. When the sweet spot is hit, it will rapidly start to click, and Garrett will move his arm up.

Garrett took the money he got from selling the Horn of Quintus and spent 4,000 gold[1] to purchase his first pricey pair of lockpicks from Farkus, shortly before he was mistaken for Garrett and killed.

The picks come as a set; one silver, triangle tooth, and one bronze, square tooth, and they are worked one at a time. Written instructions are included.

Garrett maintained the same style of picks through Thief II: The Metal Age, but in Thief: Deadly Shadows, Garrett had acquired a fancier set of lockpicks to pick all the new and more complex cylinder locks installed Citywide. The one on top is held in Garrett's left hand, and the one on the bottom is held in his right, and they are worked in tandem.

If arrested in Deadly Shadows, the picks are confiscated in Pavelock Prisons Confiscation Depository, but are easily retrieved by Garrett.