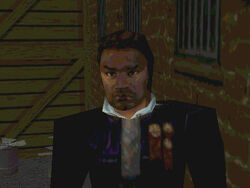 Venik Kilgor was a weaponsmith who owned a workshop in Rampone Dockside Shipping. He used to have a profitable contract with the Hammerites as he produced gear for them, but since the rise of the Mechanists the Hammers began to decrease their orders. At that point he redirected his business towards the City Watch and began making swords and armor for them. Kilgor supported the Mechanists as he believed they would bring prosperity and profit to The City.

Enemies, Creatures and Characters
Retrieved from "https://thief.fandom.com/wiki/Kilgor,_Venik?oldid=57378"
Community content is available under CC-BY-SA unless otherwise noted.