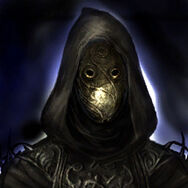 Keeper Enforcers are an elite group of Keepers, who are sent to complete only the most dangerous tasks, and obey orders only by the First Keeper, Orland, in Thief 3.

In accordance with Keeper tradition, Enforcers are scribed in the Book of the Names, and their names are never spoken of again.[1]

They also act as the Keepers 'Assassins' such as when they hunted down Garrett after he escaped the Keeper trial.

According to a book found within the Keeper Library, initiates who chose to become Enforcers instead of regular keepers can do so on by their own free will, but under an elder's supervision. Initiates must have mastered all forms of keeper weaponry, stealth training, as well as glyph magic.

Before the title of enforcer is handed down to them, powerful glyphs are placed on the initiates' bodies in order to augment their awareness, strength and empower them with telepathy, their one and only form of communication. There is no known method as to how the transformation process can be reversed, but perhaps via the Final Glyph. Strangely enough the enforcers' telepathy can be heard by certain people with a degree of Keeper training, namely Garrett.

Enforcers follow the direct orders of the First Keeper, acting as the elite keeper army and assassins. They are harder to kill than most regular guards. Among the enforcers themselves there is no known system of leadership, but on occasion one enforcer can be heard repeating their orders to the rest of them. Enforcers also call for help in case they are under attack or have found clues or any other information related to their mission.

Can be easily knocked out when attacked with the Blackjack, from behind, when caught unaware.

Enemies, Creatures and Characters
Retrieved from "https://thief.fandom.com/wiki/Keeper_Enforcer?oldid=60602"
Community content is available under CC-BY-SA unless otherwise noted.