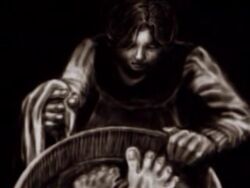 Garrett helped Basso break her out [1], and presumably she and Basso were married shortly after with Basso going legit. After Jenivere's escape Lady Rumford went to Shoalsgate Station and reported her missing to the City Watch, claiming there is no reason for her to run away[2].

Enemies, Creatures and Characters
Retrieved from "https://thief.fandom.com/wiki/Jenivere?oldid=67426"
Community content is available under CC-BY-SA unless otherwise noted.