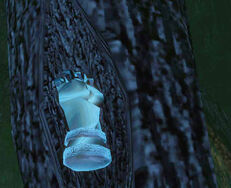 The Jacknall's Paw is a mummified hand (or else a literal paw, which it more closely resembles), and one of the artifacts or Sentients, that activate the Final Glyph when placed into certain "receptacles" built into the City. It is kept hidden deep underground inside Pagan territory for ritualistic practice by the Pagans.

One needs to follow the Ritual of the Root to unbind it from its safekeeping at the Taproot of The Heartoak. If an attempt is made to take the Paw without performing the ritual, the punishment is death. A pagan by the name of Pugleaf died in this manner, which prompted Shaman Woodbine to put up a reminder outside the Taproot Cave.[1]However, in gameplay, the Paw simply cannot be used/taken without completing the ritual. The actual procedure is written in a book in Woodbine's quarters. The procedure consists of:

The origins of this sacred artifact are unclear: The Ancient Keepers are said to have created the five sentients, but cannot logically have created all five artifacts. [3] It is most likely a prehistoric Pagan token later endowed with sentience for its use in the final glyph. In an anonymous note to Orland, Gamall suggested that Garrett steal the Paw from the Pagan Sanctuary in exchange for access to the Keeper libraries, under the ruse that it would show his worthiness and that the artifact could be studied.[4] Sometime after Garrett delivered the Paw, Gamall secreted it away to her lair. Garrett stole it back from her and used it at the end of Thief 3 to activate the Final glyph and destroy all glyph magic. It was then magically returned to the Pagans at the Pagan Sanctuary.

Artifacts and Special Loot
Retrieved from "https://thief.fandom.com/wiki/Jacknall%27s_Paw?oldid=67470"
Community content is available under CC-BY-SA unless otherwise noted.