Start a Wiki
The Horn of Quintus 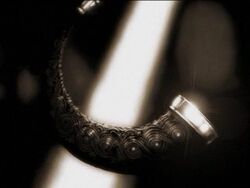 The Horn of Quintus was a valuable horn which was owned by the Quintus family and placed in their tomb in the Bonehoard. The horn was a priceless artifact and had a reputation among skilled thieves in The City, though its value was not fully appreciated by others, such as Marcus.[1] There had been at least a few attempts to retrieve it, though none before Garrett were able to reach the Quintus tomb, let alone steal the artifact.

In addition to its monetary value, the Horn of Quintus had mystical properties as well. It could be heard echoing throughout the Halls of Echoing Repose without anyone blowing it. Its music also had an effect on the local fauna. In particular, Burricks close enough to hear the horn seemed to be enchanted by it, standing still and ignoring everything happening around them. When Garrett removed the horn from the tomb, the music suddenly stopped, and the burricks, no longer enchanted by the music, once again became aggressive.

Its famous musical sequence is basilar, and is formed by just four different notes:

These two periods continues to repeat themselves alternately, giving a sweet and melanchonic music.

Artifacts and Special Loot
Retrieved from "https://thief.fandom.com/wiki/Horn_of_Quintus?oldid=64261"
Community content is available under CC-BY-SA unless otherwise noted.