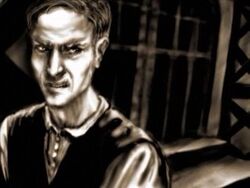 Giry was a former employee of the Old Quarter Opera House, and one of Garrett's informants. He worked at the ticket counter until he was fired, probably by Lady Valerius. He took up residence in the subterranean caves where the Keepers had hidden the Talisman of Water.[1]

When chased out of the sewers by Valerius' guards[2], the local spiders migrated toward Giry's home. Giry found this trend disturbing and meant to finding a new place to live, but fell prey to the spiders the night before he was to leave.[3]

In the TG mission "Song Of The Caverns", Garrett descends into the cave, intending to get some information from Giry, only to find his mummified remains encased in spider silk.

Retrieved from "https://thief.fandom.com/wiki/Giry?oldid=66308"
Community content is available under CC-BY-SA unless otherwise noted.