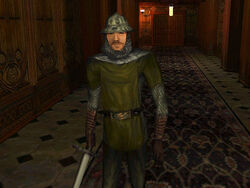 The Gervaisius guard is a powerful and dangerous guard armed with a sword, found only in the Gervaisius Estate in Thief 2, under the employ of Lord Gervaisius, thus the name.

The Gervaisius Gauards have a much higher level of alertness and Aggression compared to the common Sword Guard, giving an extra challenge to ghosting missions, such as Casing the joint, which when added to the increases level of Mechanist machines, namely Watchers and turrets, give unwelcome thieves a hard time.

With a much higher health then the average guard and a slightly higher flee level, anyone wanting to try and take them on in combat should expect to draw attention while trying to take them down.

Enemies, Creatures and Characters
Retrieved from "https://thief.fandom.com/wiki/Gervaisius_Guard?oldid=67941"
Community content is available under CC-BY-SA unless otherwise noted.