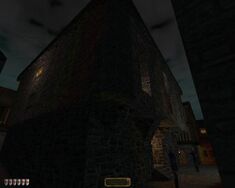 Until he was ambushed by the City Watch, Garrett lived in a small apartment in an unspecified location in the city to the west of Shalebridge. He was always troubled paying the rent for his shelter. Garrett used his wardrobe as a secret hiding place for equipment which turned out to be useful for his escape.

It is unknown whether this is the same apartment Garrett rented in Thief: The Dark Project.

The building's floorplan
Add a photo to this gallery

Retrieved from "https://thief.fandom.com/wiki/Garrett%27s_Apartment_(Thief_2)?oldid=66613"
Community content is available under CC-BY-SA unless otherwise noted.