Gamall, also known as the Hag, is a centuries-old woman with extraordinary glyph powers, who is the main antagonist in Thief: Deadly Shadows. Her home is a hidden building in Auldale, accessible only through the canal.

Gamall was one of the four early Keepers who had discovered the Glyph of Transmutation, but proved to have less balance than her associates, Daegar, Somersault, and Vandolyn.[1] At some point, she retrieved it along with other glyphs which allow her to siphon the vitality of other beings and extend her life.[2]

Some 50 years before the game takes place, Gamall had infiltrated the Shalebridge Cradle and slew an orphan girl to steal her form. The body was interred in a secret chamber of the Fort Ironwood catacombs and special glyphs were placed on the tomb to prevent it from becoming unusable. In this disguise, she later rejoined the Keepers under the same name and eventually rose to the rank of Translator to Caduca.

In her disguise, Gamall has the appearance of an eerie pale and seemingly emotionless version of Lauryl. She became the Keeper Translator, assisting with research and translating Caduca's cryptic interpretations into English. This role proved useful as she could easily remove important texts without anyone's knowledge. She was also able to manipulate Orland through letters attributed to Caduca.[3]

After the clock tower incident, Gamall murdered Caduca. This may have been done to prevent her from revealing the truth, to succeed her as Interpreter, to have Garrett convicted, or any combination of the three. It is not clear why she turned her to stone. 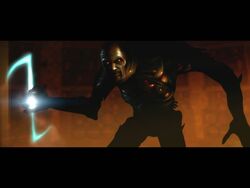 Also known as
The Hag, The Grey Lady, The Abomination, The One who Lies Dormant, The Destroyer
faction(s)
unknown
Allies
Stone Minions
Enemies
The One, The Last of all Glyphs
First Introduced
Thief: Deadly Shadows
Voiced by
Wren Ross
Health
Maximum
immortal
Flees at
never
Attack
Primary Attack
red fireball

A mythical serial killer who purportedly stalks the night slaying victims and stealing their skin. Even the Pagans, who deal regularly with monstrous creatures, regard her as an abomination.[4] The Hag appears to be the Boogeyman of the Thief world and is featured in a variety of children's rhymes and night-time tales, yet few believe she actually exists. Over the years she has obtained a number of additional powers, such as temporary invisibility, generating and reshaping glyphs at will, animating statues, creating doorways in walls, and petrifying people.

In her street clothes, she appears as a bent old cripple with a hideous face. Although a number of people have seen her, few dared to approach.[5] Her true form, a distorted hulking mass of tightly bound remains, is only revealed after Garrett removes the glyphs from Lauryl's grave, interrupting Gamall's inauguration ceremony.[6]

Her extra skins and all of her powers are lost when the Final Glyph is activated, and she reverts to a weeping decrepit old woman. She is quickly apprehended by the Keepers and never seen again.[7]

In the game, Translator Gamall appears only on day 4, walking around the room and balcony situated above the front atrium of the Keeper Library. Like other females, a mesh error causes her to grow several inches when alerted. Due to an error in scaling, she does not actually touch the ground, but hovers slightly. She can easily be killed, even by accident, resulting in failure.

The Hag only patrols areas near the five artifact receptacles. Any passers by will be attacked on sight, making ready opportunity for diversions. Due to her size, she cannot get through most closed passages. Because the designers used the same model properties as for the Tree Beast, she has a very high running speed.

Her only in-game weapon is a crimson fireball which she summons with a hand clapping action. This fast moving straight-line projectile is highly damaging, but difficult to aim at other NPCs. She also has the power of temporary invisibility, which she uses shortly after sustaining damage. She does not normally attack while invisible, but seems to be more aware of nearby opponents.

Although nearly invulnerable, Gamall is still susceptible to injury and slipping on oil. She does not need to breathe, and so can endure noxious gas and choking moss, as well as survive underwater, but will not be able to get a clear shot if she falls off the pier in the Docks. She can easily break her neck if she slips on a stairwell or similarly sloped surface. This differs from a knockout in that she can still become invisible and open her eyes.

Dover's Journal suggests that she is at least two hundred years old if not older.[8]

Enemies, Creatures and Characters
Retrieved from "https://thief.fandom.com/wiki/Gamall?oldid=67698"
Community content is available under CC-BY-SA unless otherwise noted.