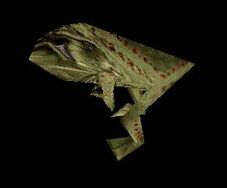 The Frogbeast first appears in TDP/TG as a part of The Trickster’s army. It is a small and agile frog-like creature with an upturned mouth. Upon encountering an enemy of the Maw, it races forward and explodes violently in a shower of blood and mess.

Frogbeasts communicate through a series of high-pitched croaks and squeals and can be identified by the characteristic squelch of their footsteps. They usually congregate in groups, but have been known to patrol alone.

It is not clear whether they can reproduce normally. The giant eggs introduced in T2 bear fully developed individuals, and so might be spawned directly from the Maw of Chaos.

After teaming up with Viktoria, Garrett is able to purchase eggs containing live frogbeasts. These are friendly toward him and will attack any enemy on sight, but otherwise, their behaviour is the same.

The Frogbeast makes various noises when hopping about, easily attracting the attention of anyone nearby. This alone makes it a good distraction tool, to say nothing of its explosion. It is very good for clearing crowded rooms and most effective against Combat Bots, which often miss completely or have their bombs ricochet back at them.

As an opponent, the frogbeast is very weak; easily destroyed with one strike. What makes it a danger is its tendency to explode anyway. The best strategy, therefore, is to attack from a safe distance.

This volatile nature can also be used to the player’s benefit. When in proximity to other opponents, the frogbeast can be used to impart severe damage to all nearby creatures, including other frogbeasts, with a single arrow.

Enemies, Creatures and Characters
Retrieved from "https://thief.fandom.com/wiki/Frogbeast?oldid=73523"
Community content is available under CC-BY-SA unless otherwise noted.