The Flash Bomb is a harmless explosive, that temporarily blinds nearby beings when thrown.

Attack: causes 10 points of damage at the center of detonation to all Undead

Maximum amount in inventory (TDS only): 20 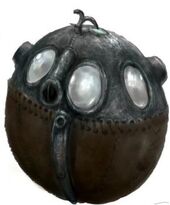 Sometimes even the most skillful thieves get caught in the wrong place and have no other choice but a frontal confrontation. The Flash Bomb is the first hand emergency tool.

When thrown to the ground, it bursts into a bright light upon impact, temporarily blinding everyone nearby who's looking towards the explosion. Then, all blinded souls will concentrate on regaining their eyesight for a few moments, unable to react to anything, offering the chance of escape. The best effect, however, is that the flash makes the blinded vulnerable for being Blackjacked, regardless of their alertness. One can then render them unconscious with a single hit from any direction (not only from behind). This means that even if a guard or a creature has discovered Garrett and is charging for an attack, a situation where the Blackjack is ineffective, it can be blinded and knocked out with the Blackjack. Furthermore, if the flash blinds a group of characters, they can all be knocked out at once. But this must be done before they regain their eyesight or they will be immune to the stun effect again. The targeted character(s) must be looking directly towards the flash when the bomb activates, or they won't be blinded. Sometimes characters look away or run past the explosion, thusly not being affected by it. There are some restrictions however to this ability of the Flash Bomb. Fire Elementals, for example, cannot be blinded at all. The Tree Beasts can be blinded, but can't be knocked out with the Blackjack. In Thief 1 and Thief Gold the flash doesn't affect Garrett's eyesight seriously (except a brief haziness), but in Thief 2 it can make him unable to see anything for a few seconds, if he is careless enough to look towards the flash.

The vulnerability of the Undead to bright lights make the Flash Bombs good friends when traveling in areas where the dead rest uneasy. The flash deals 10 points of damage if they're very close to the center of the detonation and smaller amounts if they're farther away, effectively damaging all Undead in the same premise. The Flash Bomb has the most massive effect upon Undead out of all the weapons. Three flashes can dismiss Fire Shadows, four flashes can take care of Apparitions, and Haunts surprisingly may fall from only two flashes. But that is only if the detonation is close enough. Zombies act strangely when they take more than lethal damage. They should be killed by two Flash Bombs, but instead they fall to the ground and enter dormant state. Then it takes one more flash to finish them off. Regular adventurers, thieves and undead hunters prefer to hunt undead with Fire Arrows and Mines, but some claim that the Flash Bombs are the best weapon against Haunts and Apparitions.

There are three main exceptions from the above present in Thief: Deadly Shadows. Firstly, targets don't need to look at the detonation point in order to be blinded. They will be blinded even if the bomb activates close behind the target. Another improvement is that the stunning effect is prolonged, but the ability to Blackjack the blinded persons is no longer available, as they will instantly refocus once they have been hit.

The blueprints are featured in Thief II's final mission, Sabotage at Soulforge. Flash Bombs may come in handy here, especially with the high quantity of the Builder's Children.