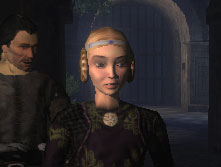 Lady Elizabeth is a noblewoman and bride-to-be of Lord Ember. She attended Lady Pollock's School for Young Ladies, and can write in both ancient Brillian and modern Prinkish, in addition to having an extensive knowledge about poisons.[1][2]

Lady Elizabeth has taken to making her time at Rutherford Castle miserable for everyone. She stole the Gilded Helm from the Rutherford Castle Guards[3] to help create more chaos between the guards and Lord Julian. She had planned to poison Lord Ember in order to gain possession of the Bloodline Opal,[4] but loses the opportunity when Garrett loots the castle.

Lady Elizabeth is only seen after the second TDS mission, in South Quarter with her hired thugs. They are searching for the opal, which is still in Garrett's possession. Inside the guardhouse near the gate to Stonemarket are two 50g coin purses that constitute the wages of the two brigands who collect them one at a time. If either thug finds that his money is gone, he will attack Lady Elizabeth.[5]

Although she claims to have a poisoned dagger, Elizabeth wields only a standard sword.

Enemies, Creatures and Characters
Retrieved from "https://thief.fandom.com/wiki/Elizabeth,_Lady?oldid=67185"
Community content is available under CC-BY-SA unless otherwise noted.