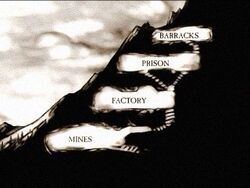 Location
Mountains
Owned by
Order of the Hammer

Cragscleft Prison was a multifunctional Hammerite complex, carved out of a quarry, situated in the mountains outside of The City. It was most well known for the prison located within it. It consisted of four distinct areas, namely a mining complex, a factory, a prison, and barracks. The whole Hammer complex was known throughout the City simply as Cragscleft Prison. In the TDP/TG mission "Break from Cragscleft Prison", Garrett must sneak in and find Cutty in order to get his pay.

The mines occupied the lowest section of Cragscleft. They were partially flooded, and were infested by the undead, primarily zombies. As such, the Hammerites did not work the lowest levels.

The factory was situated just above the top mine level and was presumably safe from any undead lurking below. It was used for various types of Hammer craftsmanship, but mainly for casting hammers in large machines. Convicts from the prison were sometimes sentenced to factory work here.

The prison was the most well-known and infamous part of the Cragscleft complex. It was located above the factory area, and was divided into four cell blocks. The prison was used to contain people who were caught breaking the self-imposed Hammer tenets. The order determined who was a criminal through its own judgement, separately from the City Watch.

Based on a letter between Ramirez and Commissioner deNavan, it seems likely that the City Watch sent their prisoners to Cragscleft Prison.[1]

The Barracks occupied the top level of the complex, and contained the administrative offices and the chapel, as well as dining and other sections. Evidence and other valuable items collected from prisoners were stored here.