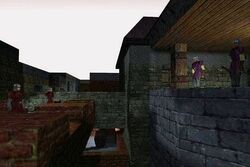 Common bow guards are hired mercenary guards, usually hired by those who wish to defend their property but cannot afford their own personal trained guard staff (such as Bafford Guards or Gervaisius Guards). Common bow guards can be identified by their red or purple uniforms.

Common bow guards are as tough as a regular Bafford Guards, but are actually a lot more adept and vigilant. They seem to notice a thief faster and their firing speed and accuracy are also higher.

Guards can wield either swords or bows, those armed with bows shoot with considerable ferocity, and can be considered fairly accurate if Garrett makes little effort to evade their shots. Like their counterparts, they will chase when alerted. They will run out of breath, giving Garrett a chance to escape.

Enemies, Creatures and Characters
Retrieved from "https://thief.fandom.com/wiki/Common_Bow_Guard?oldid=47749"
Community content is available under CC-BY-SA unless otherwise noted.