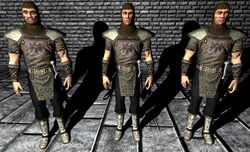 The City Watch are Garrett's main nemesis on the streets; wherever they are present Garrett cannot be seen lest he face their persecution, as they aggressively and eagerly attempt to kill him or drag him to Pavelock Prison.

City Watch guards are not very alert and patrol most streets in the city, avoiding them is not difficult as most have very linear patrol patterns, though have a tendency to spawn in previously cleared streets moments after leaving.

If they discover Garrett, they will shout out, draw their sword or bow and attempt to give chase. They are not too quick, and frequently run out of breath. When at low health they will often drop their weapon and flee, seeking out other nearby City Watch.

The uniforms took a serious change after the years of Sheriff Truart. They still wear blue shaded uniforms, but most of it has been grayed. The new Watch symbol is on the center of the chest, and while they lack helmets, they now have a full head covering of chain mail. The uniform now has large shoulder pads. They do not wear gloves, but have large bands covering their forearms. The tall black boots have been abandoned, instead using smaller white boots.

Unlike previously, there are no Sergeants, Lieutenants, or Helmet Guards seen. All of the females seem to have left the department. The newer officers seem to be made up of more unsavory looking men, those who are dirty-looking or obese. It seems obvious that the sharp, professional image of the watch has been lost. This could be due to the loss of its Sheriff and two of its Lieutenants (Mosley probably lost her job because of the Pagan sympathy or perhaps the stigma of being connected to the Mechanists).

Enemies, Creatures and Characters
Retrieved from "https://thief.fandom.com/wiki/City_Watch_Guard?oldid=58089"
Community content is available under CC-BY-SA unless otherwise noted.