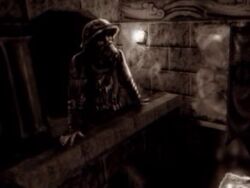 Brother Cavador was a top-ranking Mechanist and supervisor of the Cetus Project.[1] He was very important to Karras as he was responsible for most of the projects in Markham's Isle and the KD Site[2] such as excavation, facility building and labor supervising. This made him extremely valuable for the Mechanist Order, and for that reason Cavador takes care to ensure his safety, being accompanied at all times by personal guards.

He travelled between the Mechanist compounds in the pursuit of his duties, but he also made residence in Site 5[3] of the K-D complex. Due to fears of encountering a stray Burrick, despite being told they were wiped out, he always wore an air filter over his nose and mouth. Because of this mask, Cavador was also unaffected by gas arrows and gas mines, though such weapons would still render his guards unconscious.

Cavador is a true scientist by nature. Being crucial to the dictator and thus enjoying priority supply and considerable freedom, he is often tired of Karras's orders. He is fascinated of the Ancestors's culture and wants to calmly explore Karath-Din instead of erasing local organic life with Necrotic Mutox. He even threw the whole supply of the gas into the lava.[5] Cavador is admired by other Mechanists. Despite his busyness, he can always find a minute to help a fellow mechanist should the latter have difficulties with the craft.

Cavar means to dig in Portuguese and in Spanish, Cavador means the one who digs.

While supervising Mechanist operations in Karath-din, Cavador was kidnapped by Garrett, who had managed to infiltrate the lost city via the Cetus Amicus. At the hands of Viktoria, Cavador revealed that he had instructions from Karras to deliver 30 Precursor Masks and Cultivators.[6] His subsequent fate is unknown.

Enemies, Creatures and Characters
Retrieved from "https://thief.fandom.com/wiki/Cavador,_Brother?oldid=73531"
Community content is available under CC-BY-SA unless otherwise noted.